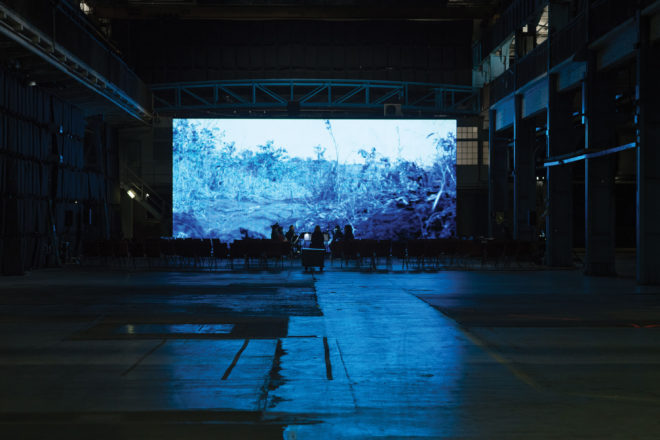 – an inhalation and exhalation in four movements for winds, voices, strings and images.

PNEUMATICKS is a piece shaped on the phenomenon of respiration – the opening between the inner and the outer. The breath is the life force in its simplest form, which with its continuous inhalation and exhalation takes place unconsciously, but in PNEUMATICKS the breath becomes conscious and is shaped into an unusual force in music and image. In its uncompromised form, the piece sends fluctuations of light and sound waves and results in a poetic impact of organic energy.

PNEUMATICKS is synchronously developed by composers and visual artists. The set-up consists of a movie shown on a 12 meter screen, with music performed semi-acoustically by a classically-inspired ensemble.
The film depicts the making of a jar created by Leotissa Ayelango, a woman who lives in a certain place, where the soil contains special nutrient mineral primers that make it particularly fertile.

Contributers, project development and support from:

The project is developed by the art collective SUK and Projekt Respiration.