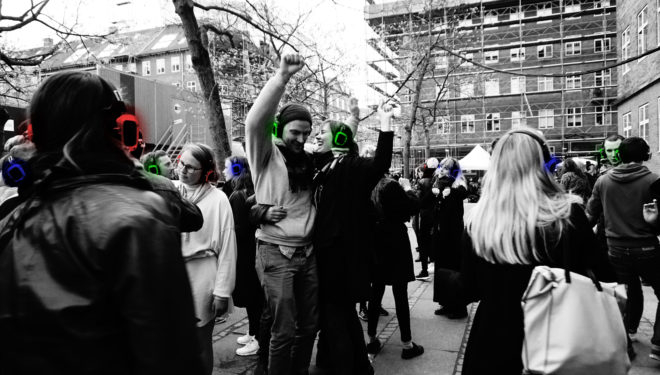 The Silent Disco street parties breaks up the anonymity of the city. It is just as fun to be an observer as it is to be a participant in the middle of the mass. If you dare put on some headphones, the person next to you will quickly become your friend. You can switch between 3 channels/DJ’s that will make your headphones glow red, blue or green. Hence, the party has three dancing communities at the same time – communities that you can dance in and out of 100 percent controlled by the sound that makes you vibrate the most.

This Silent Disco party takes place in an as of yet unknown part of Copenhagen but there will be Silent Disco events in Aarhus and other cities throughout the summer.

Location: Vote for a place in Copenhagen here.

Entry: lease of headphones is 35 DKK